Join us for the launch of Keeping the Song Alive 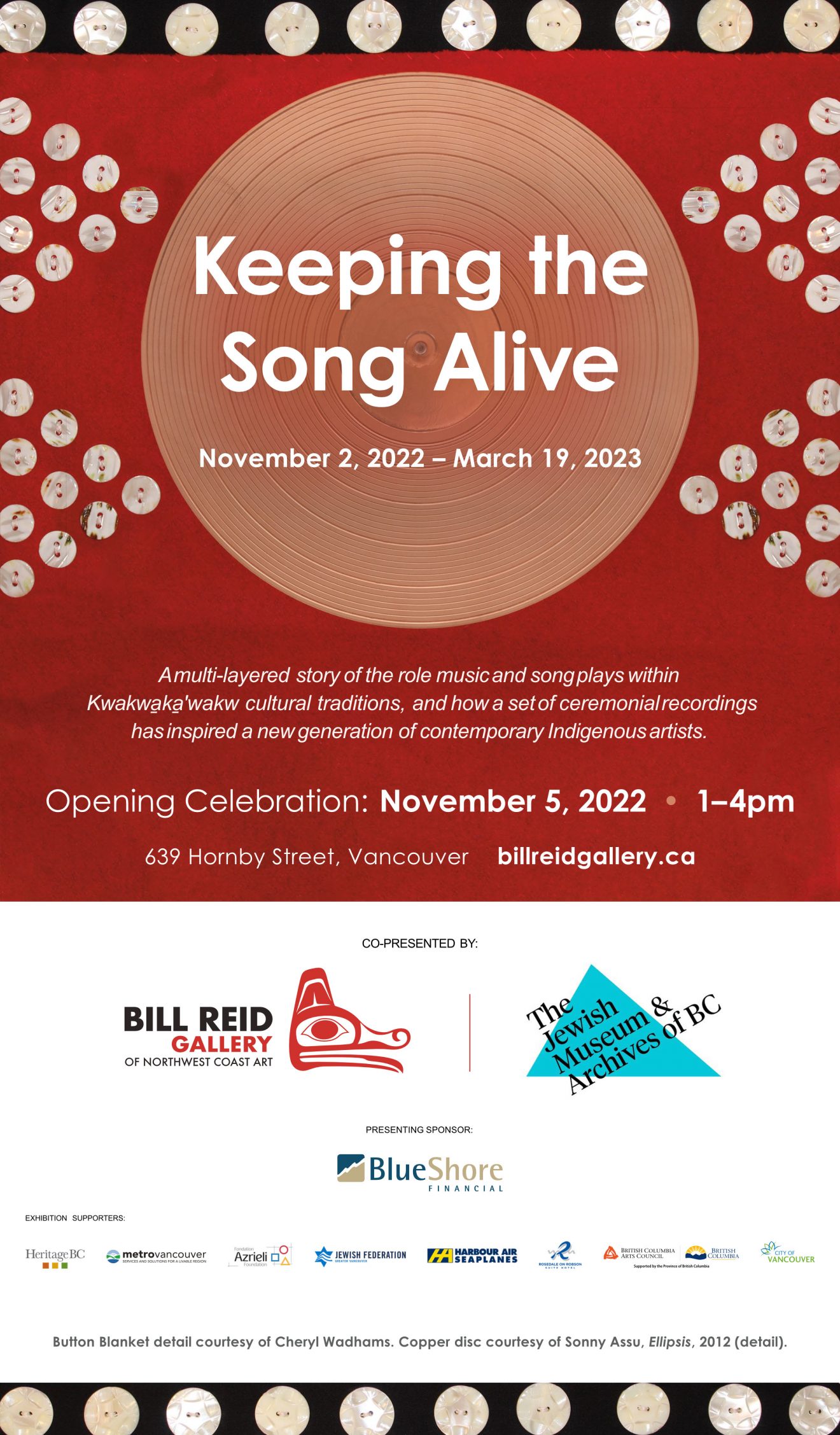 VANCOUVER, BC — Bill Reid Gallery of Northwest Coast Art presents the Canadian premiere exhibition of Keeping the Song Alive from November 2, 2022 to March 19, 2023. Guest curated by Cheryl Kaka‘solas Wadhams and co-developed with the Jewish Museum & Archives of BC, Keeping the Song Alive shares the mostly unknown story of the decades-long work between ethnomusicologist Dr. Ida Halpern and the late Kwakwaka’wakw Chiefs Billy Assu and Mungo Martin to document hundreds of sacred and traditional songs that otherwise would have been erased due to the Potlatch Ban and suppression of Northwest Coast Indigenous culture.

Through a rich mix of traditional music and regalia, contemporary art, film, and historical documentation, Keeping the Song Alive celebrates a unique friendship, the spiritual power of music, and the beauty of preserving ceremonial art and culture for future generations. For Kwakwaka’wakw peoples, songs are an essential part of cultural knowledge and ceremonial life, part of the rights and privileges of Chiefs that strengthen identity and lineage. The Big House is a place of belonging where songs, language, drumming, and dancing come together, and where the next generation is continuing these traditions in a good way.

“As a Jewish immigrant fleeing the Holocaust, Dr. Ida Halpern understood the impact of cultural erasure,” says Wadhams, Guest Curator, Keeping the Song Alive. “Assu and Martin trusted her as an ally to preserve and record songs fundamental to the Kwakwaka’wakw culture that would have been lost forever due to the Potlatch Ban. Decades later, they couldn’t have imagined how enduring and profound their collaboration would be. This exhibition reflects on the tremendous impacts of the Potlatch Ban, residential schools, and the Indian Act, and showcases the significant works by contemporary artists that have been inspired by these recordings.”

The exhibition will feature the original audio recorder, records, research notes, and photographs from Dr. Halpern’s career as an ethnomusicologist in Canada, following her escape from Nazi Europe in the 1930s. These significant historical artifacts will be displayed alongside contemporary Kwakwaka’wakw artists who are actively responding to the history and meaning of these recordings. Ellipsis, an installation of 137 copper LPs critiquing the ongoing oppression of the Indian Act, was created by Sonny Assu, the great great grandson of Chief Billy Assu. The powerful installation, Concealment, by Andy Everson, combines a kitchen table tea party with potlatch imagery, which recalls a time when his family had to hide their ceremonial activity. A historic headdress by Chief Robert Harris will also be displayed alongside a ceremonial robe, apron, and headdress by artist and community leader Maxine Matilpi.

Visitors will have the chance to listen to a selection of the songs recorded with Chiefs Mungo Martin and Billy Assu in the 1950s. Several films by renowned ‘Na̱mǥis Filmmaker Barb Cranmer will immerse viewers in the potlatch experience, bringing together songs, dances and drumming in traditional ceremony. A replica potlatch drum log can also be played by visitors. Finally, the exhibition presents important conversations with a new generation of artists and community members who have been able to reconnect with their culture and heritage because of Halpern, Assu, and Martin’s collective work.

Kwakwaka’wakw communities continue to work to regain traditional knowledge about the ceremonies that were lost due to colonization. Halpern’s recordings, many completed when it was illegal for Indigenous peoples to practice their culture, are a critical part of this work, regaining one part of what has been lost. In 2017, Halpern’s recordings, which date back to 1947, were added to the UNESCO Canada Memory of the World register.

Keeping the Song Alive, through historical information and a rich and immersive selection of contemporary art, audio, text, photographs and video, will offer visitors a chance to better understand the meaning of potlatch and the essentiality of music to ceremony. A series of artist talks, Kwakwaka’wakw dance and drum group performances, and hands-on workshops are being planned. In 2024, the exhibition will be remounted at the U’mista Cultural Centre in Alert Bay, BC.

Cheryl Kaka‘solas Wadhams is a member of the ʼNa̱mǥis Nation with connections to the Maʼa̱mtagila, and Mama̱liliḵa̱la Tribes of the Kwakwa̱ka̱ʼwakw Nation, a practicing artist, and also works as the Visitor Services and Gallery Shop Manager at the Bill Reid Gallery. She holds both a Degree in Aboriginal Studies and a Diploma in Small Business from Langara College, and her experience includes work with the BC Assembly of First Nations and Native Education College. Wadhams is an active member of the local Urban Kwakwaka’wakw Dance Group. She is a new Kwak’wala language learner and recently participated in the First Nations Endangered Language Program at UBC.

About the Jewish Museum & Archives of BC (jewishmuseum.ca)

The museum and archives is dedicated to the collecting and sharing of community memories of Jewish life in British Columbia. Through innovative exhibits and programming, the JMABC builds bridges with the diverse communities of BC and heightens awareness of the rich 163-year history of Jews in BC.

The Bill Reid Gallery of Northwest Coast Art is a public gallery nestled in the heart of downtown Vancouver. It was named after acclaimed Haida artist Bill Reid (1920–1998), a master goldsmith, carver, sculptor, writer, broadcaster, and spokesman.

The Bill Reid Gallery offers public programs including artist talks and artist-led workshops which provide a greater awareness and appreciation of Indigenous values and cultures. Find public programs at billreidgallery.ca.

The Bill Reid Gallery of Northwest Coast Art is an initiative of the Bill Reid Foundation. Established in 1999 as a non-profit charitable organization, the Foundation’s mission is to preserve the art and perpetuate the legacies of Bill Reid.