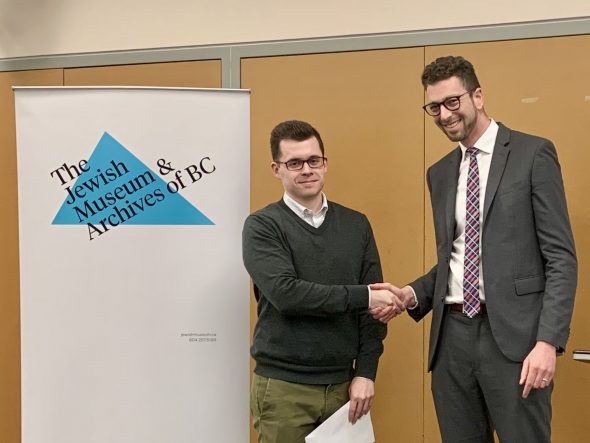 The Jewish Museum and Archives of BC is pleased to announce that the inaugural BC Jewish History Research Prize has been awarded to Nathan Lucky, for his article:

British Columbia Newspaper Responses to Jewish Persecution in Europe, 1938-1939: A Call for Refugees and a Cause for Civilization

This impressive undergraduate essay explores relations between the Jewish community press and the mainstream press in British Columbia. It demonstrates the ways in which Jews in BC were alert to world affairs and worked to impact Canadian policies of immigration in response to unfolding tragedy abroad. Juxtaposing reporting and editorials published by the Jewish Western Bulletin with those of contemporary non-Jewish publications, the author documents the shifting waves of public discourse as new information arrived from Germany and Austria.

This article makes substantial use of the BC Jewish Community Archives, particularly the Jewish Western Bulletin Collection. It illuminates a portion of the archives collection, demonstrating how future scholars might also incorporate the collection into their research. This valuable contribution to the scholarship of Canadian Jewish history fulfills the criteria of the BC Jewish History Research Prize, and it gives the jury great pleasure to bestow this well-deserved award.

The prize was awarded last night, November 21, 2018, at the Annual General Meeting of the Jewish Historical Society of BC. Following the AGM, guests gathered to hear a lecture by Mr. Lucky, summarizing his research. This award and lecture will be an annual tradition of the JMABC in the coming years.