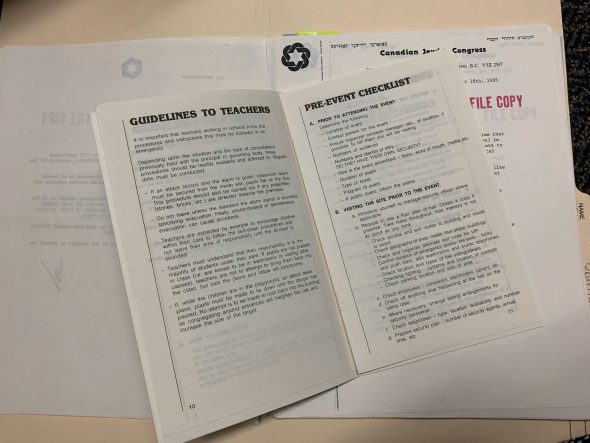 Hello! My name is Victoria and I am a Project Archivist here at the Jewish Museum and Archives of BC. I joined the team on a backlog project in January 2019 and was lucky enough to get extended through the summer. My job is to enact phase three of the processing project for an accrual (donation) of boxes from the Canadian Jewish Congress Pacific Region. The donation originally included over 100 bankers boxes, but for phase three I am only working with the records from approximately 65 of those boxes. Over the next three months, I will be working to arrange (organize), preserve, and make the records available for public use.

For this blog post, I wanted to share with you what it is like to work as a Project Archivist and show you the steps that we take to turn massive collections of unorganized paper into something that researchers can use and understand now and for years to come.

When we get an accrual of new boxes from a donor, there are varying degrees of organization. Sometimes the boxes are beautifully organized in a way that makes sense to the donor, the archivist, and the researcher, and sometimes they are not. When donations need to be organized, a project archivist is brought in.

The project archivist begins to “process” the records by: throwing out unnecessary documents (like duplicates); removing anything that can harm the records over time (like paperclips and staples); migrating documents that are not suitable for long-term preservation (for example, photocopying newspaper clippings); and finally, arranging the files.

The arrangement of the files into an order that honours the organizational system of the donor, while also making the records accessible to archivists and researchers, is often the most difficult part of records processing. This was especially true for the Canadian Jewish Congress records.

In a box of records from the Canadian Jewish Congress, Pacific Region’s Multiculturalism Committee, we found an organization structure chart from 1982-1983. This chart helped us better understand the organization and informed the arrangement of our records. 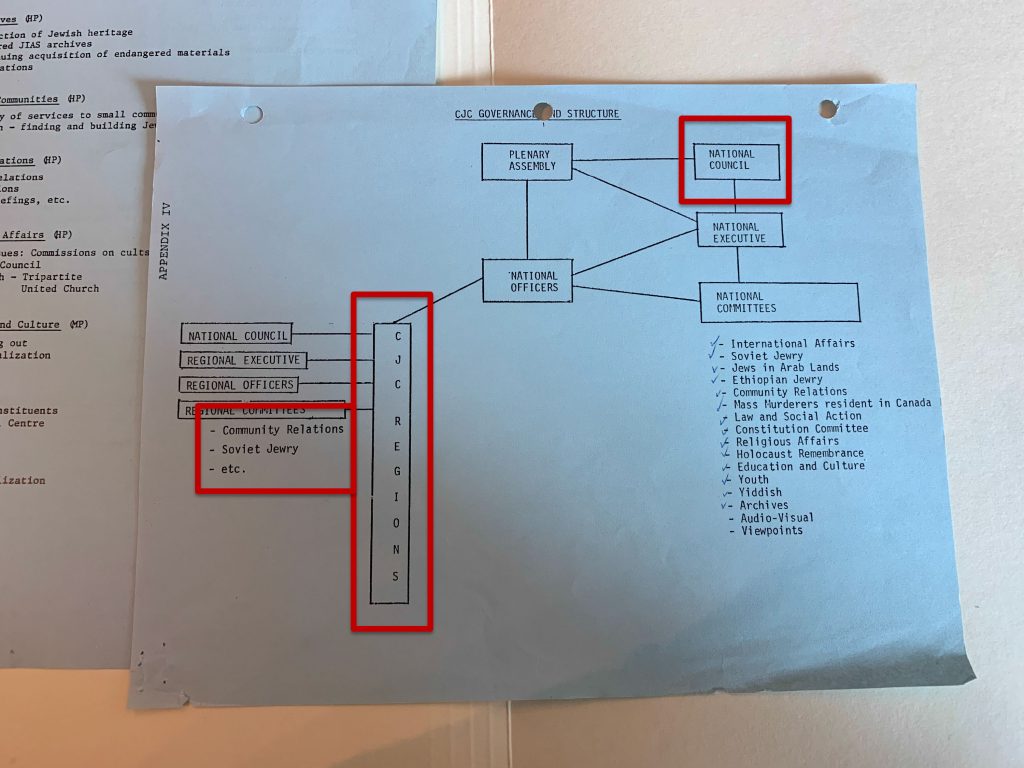 Inside the Security Committee 1985 File, you can find a booklet that was produced to help community organizations develop security strategies. The booklet provided guidance for communal buildings, synagogues, parents, teachers, and events. It featured sample letters to security officers, announcements for synagogue evacuation, and a form on action to be taken on receipt of a bomb threat. 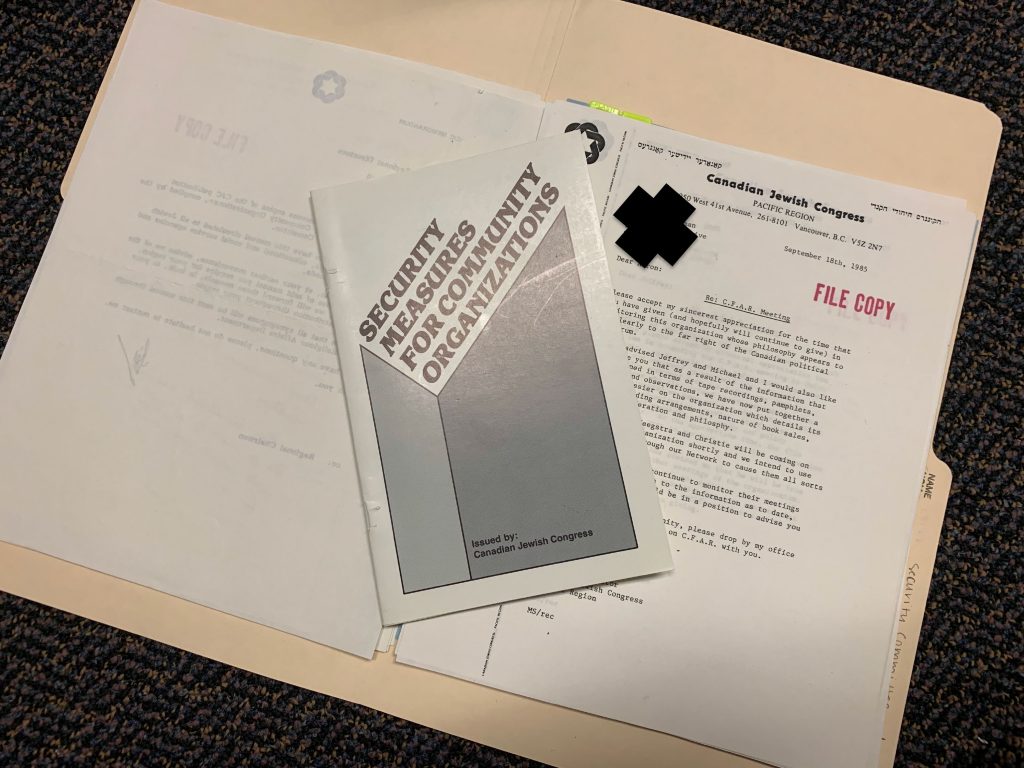 The nested structure of Files within Series’, and Series’ within the Fonds is what we’re using for the entire third phase of this project. Out of the 65 boxes to be processed, over 22 committees need to be appropriately represented. 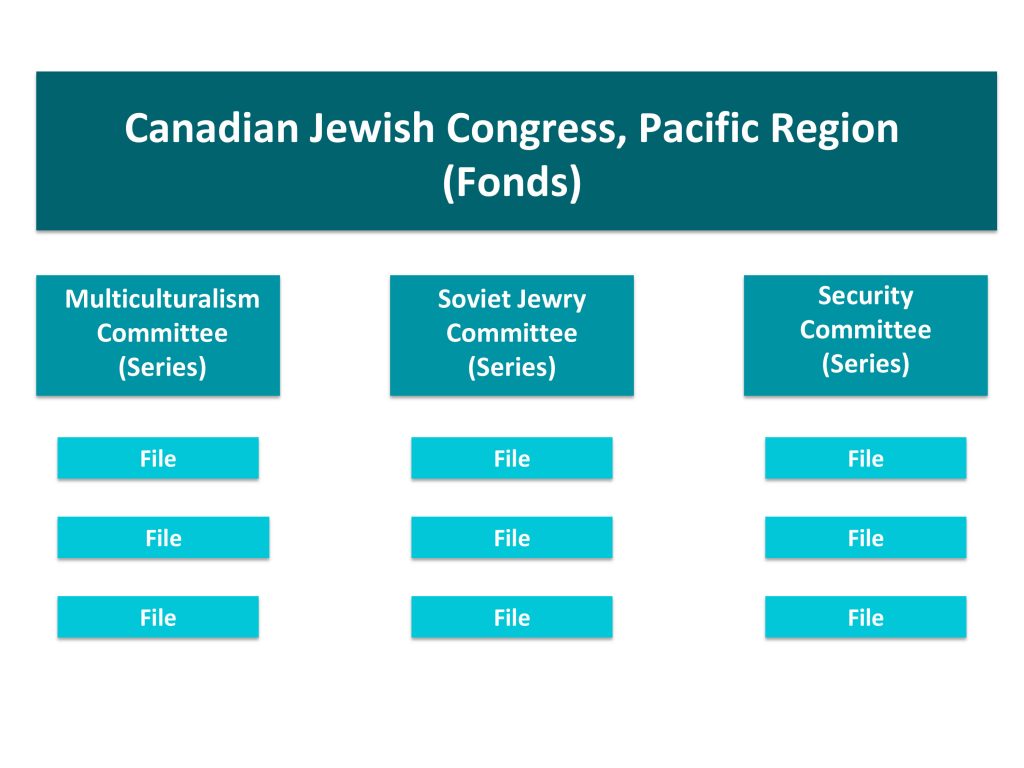 Working through the CJCPR records has been incredibly fulfilling and it is especially humbling to know that, when properly processed, these papers can easily last for hundreds of years, ensuring that the incredible work of the Canadian Jewish Congress remains accessible and in-tact for anyone who wants to see it.

If you’re interested in looking at any of the records in this post, they can all be found within the CJC Pacific Region fonds, which will be available for researchers by Winter 2019-2020.