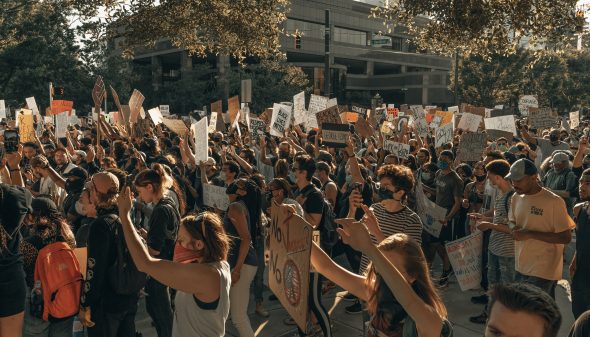 We are heartened to see people of all colours, faiths and backgrounds marching together in pursuit of justice. The racism and police brutality inflicted upon George Floyd and too many before him is abhorrent and inexcusable.

We in Canada have yet to overcome a similarly racist system that marginalizes the voices of Black, Indigenous, Asian, and Muslim people. Members of these communities are disproportionately targeted by racist attacks, slurs, and prejudice. This too is inexcusable and a pattern we must each actively work to dismantle.

Here in Vancouver, Hogan’s Alley, a thriving Black community filled with homes and Black-owned businesses, was razed to the ground in 1970 in the name of “urban renewal”. Half a century later, there is hope and a plan for this neighbourhood to once again serve its community. We encourage Vancouver City Council to move forward with the plans proposed and work closely with the Hogan’s Alley Society to ensure the community’s goals are realized.

The past week has been an occasion for reflection, an opportunity for us each to ask ourselves what we can do better. Museums have a long history of racism and early roots in colonialism. Early museums were not institutions of public education but private spaces for the wealthy to flaunt their conquests stolen from indigenous people in lands most Europeans had not seen. This ugly beginning of museums’ identity has faded but never fully been overcome, rearing its head time and again. Significant progress has been made in recent years, with the pursuit of Reconciliation and Repatriation becoming standard practice, but there is much work yet to be done.

We at the Jewish Museum and Archives of BC pledge to redouble our efforts in working towards justice and equity. We will continue to work closely with our partners representing the diverse communities of our city, standing with them and supporting their work to the same ends. Only by working together can we overcome this.

“Injustice anywhere is a threat to justice everywhere. We are caught in an inescapable network of mutuality, tied in a single garment of destiny. Whatever affects one directly, affects all indirectly.”